With thanks to Bill Warry, owner of www.billwarrywine.co.uk/

I was once bemoaning the excessive use of manufactured medicines in preference to more natural remedies. 'I quite agree,' said the doctor with whom I was talking. 'I look after a geriatric ward, and I stopped all sleeping pills and told one of the nurses to go round finding out what each patient's preferred tipple was and now we go round in the evening giving them their glass of wine or tot of whisky and they sleep happily and save us a fortune on pills.'

In ancient Greece the health-giving effects of wine were widely recognised. Hippocrates (he of the oath fame) advised on specific wines to cure fever, to disinfect wounds, or to use as a dieuretic.

In Europe wine was considered a much safer drink than water right till the 18th century. If one shares doubt in the wisdom of enforced fluordination of the water supply, one might consider that the same holds true today. The alcoholic properties of wine provide an automatic disinfectant. 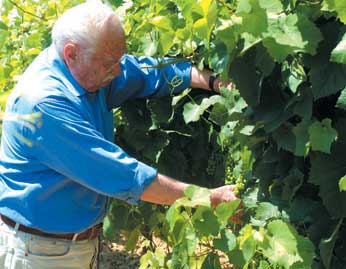 In America, for some time after the prohibition years wine and other alcoholic drinks were pretty much considered by the medical establishment as the source of all evil, certainly of toxicity. The television news magazine '60 minutes' reported in November 1991 that people in the South of France, while eating large quantities of cheese, meat and other high-cholesterol foods, suffered less from Heart disease than their more sober American counterparts. The phenomenon came to be known as the French paradox. Studies suggested that regular but moderate wine-drinking was the answer.

Numerous medical studies point to health benefits of wine to the heart, to maintaining good cholesterol levels, to preventing strokes, to fighting cancer, senile dementia and colds and flues. Here are a few:

In August 2002 a study by French Doctors published in Alcoholism, Clinical and Experimental research showed that an increase in HDL levels observed in regular drinkers was beneficial against cardiovascular problems.

In January 2003 a study in the American Journal of Gastroenterology showed that moderate regular wine consumption lowered the risk of peptic ulcers, helping the body rid itself of bacteria suspected of causing them.

At the end of 2004 a study in the American Journal of Physiology suggested that a chemical called resveratrol, found in red wine, inhibits the formation of a protein that encourages cardio fibrosis which reduces the heart's pumping action in times of stress. Wine seems to dilate the small blood vessels, helping prevent clotting.

Quite a number of studies are concluding that while all wine drunk moderately have many beneficial health benefits, it is red wine in particular that carries the most benefit. Dr Emanuel Ruben who led a study on benefits of red wine at the Jefferson Institute in Philadelphia came out with similar findings to those in the last paragaraph.Red wine drinkers showed reduced levels of fibronogen which clots blood and also of the inflamatory marker IL-1. Less fibronogen means a lower risk of heart attack. But red wine also dramatically lowered the levels of inflammatory molecules such as adhesion molecules, and proteins in monocytes and lymphocytes.

In 2001 a team of researchers from Barts  the London School of Medicine, and the Queen Mary University in London, reported that Polyphenols found in red wine, combatted endothelin-1 which is associated with the onset of artery decease. These Polyphenols were particularly prolific in red wines from the Cabernet Sauvignon grape. They were practically non-existant in white and rose wines.

A word of warning: There is one category of person that should not drink wine or any alcohol and that is pre-menopausal women if they have a family history of breast cancer.

Of course one does not need a degree in medicine to know that excessive drinking brings on loss of self-control, sickness, liver problems coronary troubles and more. The key to healthy drinking is moderation. In ancient times the Spartans thought poorly of the Athenians because they drank their wine 'akraton' ' unmixed or neat instead of mixed with water. In Europe today it is common to have water at table as well as wine albeit not usually in the same glass, and that is probably part of the explanation of the 'French Paradox'.

As an epilogue to this little article I was amused by the following internet joke that recently did the rounds:

I have been told that in a number of carefully controlled trials, scientists have demonstrated that if we drink 1 litre of water each day, at the end of the year we would have absorbed more than 1 kilo of Escherichia coli, (E.Coli) bacteria found in feces. (Sounds unlikely but makes one think). In other words, we are consuming 1 kilo of Poo.

I must point out that we do NOT run that risk when drinking wine because alcohol has to go through a purification process of boiling and  fermenting.

There is no need to thank me for this valuable information. Consider it a public service.

Last update: 12.07.2016
Contact us
If you have suggestions or feedback on any pages, use the form below.