Broken Shackle red is a relatively new wine, having been established in a sub region of Eden Valley in Southern Australia in 1996 by Bob and Cherie Berton in their own personal 75 acre plot which came to be known as the Berton Vineyards. Some of the land is used for Chardonnay with the rest being given over to the production of Red Shackle, which in this case is a heady mix of several grapes: Barbera 58.2%, Shiraz 37.5% and others making up 4.3%. 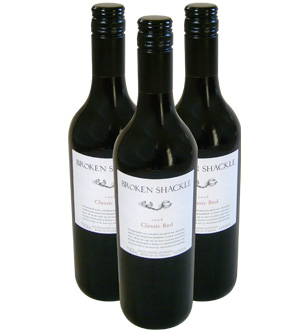 The Berton Vineyards are described as being a contemporary winery with an emphasis on all that is casual, friendly and approachable in wine. The company is making its mark in the world of wine in an understated way whilst making a positive impression on enthusiasts worldwide who seek them out to find wines that are high quality and suitable to their individual palate.

Wine buffs often take an interest in the origins of the wines they buy, to the extent of knowing at least something about the conditions in which the grapes are grown, the soil, climate etc, and it is true to say that the Bertons with their 75 acres did not start off their crop with what we could describe as a following wind.

Indeed, though the high country of Eden Valley has a long history of viticulture, the vines producing the grapes which come to make up Broken Shackle started off their lives the hard way with little in the way of permanent water to make them thrive, and consequently the vines struggled and became stunted.


It matters not how much TLC a vine has, how much love, devotion and attention, if the poor plant lacks the necessary permanent water. The Berton vines certainly had everything which it was humanly possible to provide in those early days ? apart from water.

Help was at hand, not from Mother Nature this time but in the shape of a new Dam which was finally completed and filled during 1998.

The full Dam augmented the rainfall and from that day on the Berton vineyards have never looked back, having even planted Cabernet Sauvignon and lastly some Sauvignon Blanc since then.

But we must return to the topic of the Broken Shackle red 2008, a vibrant crimson red in colour which is an appealing characteristic of the wine, the aromas of which are a mixture of dark cherry, blackberries, nutmeg with fragrant bay leaf and rosemary notes.

The palate is lively and exhibits intense forest fruit flavours which are wonderfully offset by spicy oak and a background of aromatic dried herbs.

We are grateful to have been advised of a good serving suggestion for Broken Shackle red, and that it is perfect with spicy lamb dishes served with lightly grilled Mediterranean vegetables, and for the technical it may be noted that the ABV is 14.5%

Contact us
If you have suggestions or feedback on any pages, use the form below.